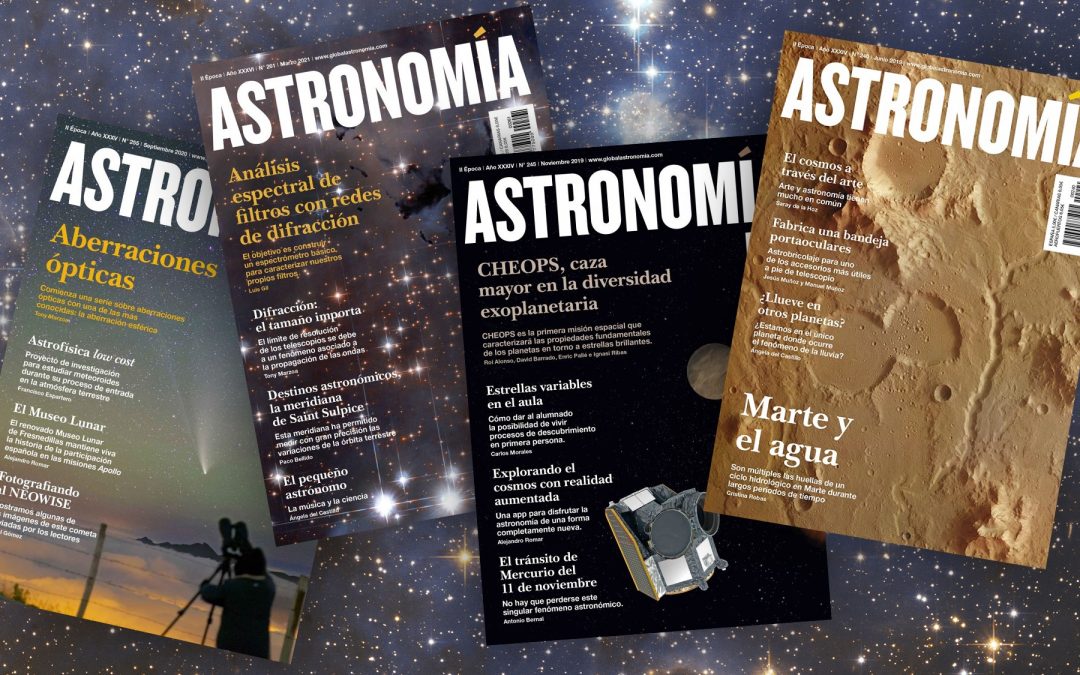 “Astronomía” was the first Spanish magazine entirely dedicated to astronomy and astrophysics communication. For almost forty years they’ve been doing an explendid job as science communicators, and between the on-paper versión and the newest on-line one, they’ve reached thousands of space fans and amateur astronomers that every month get their longed-for issue. As of 2022, we’ve been collaborating for four years with their project, providing yearly articles for them to publish.

Our collaboration began back in 2019 when the article “AR and VR for space science education” appeared in number 240 (pages 20 and 21). In this text, we overviewed the current challenges that education and science popularization programmes face nowadays and proposed Augmented Reality (AR) and Virtual Reality (VR) as solutions. We discussed some of the main advantages of using these technologies for educational purposes and presented those that back then were our latest VR experiences, the Apollo 11 VR experience and the Apollo 17 VR driving simulator.

[…] Augmented Reality is the inclusion of virtual elements in a real environment. Virtual Reality is an experience where all stimuli from the real world are completely replaced by those from a computer-simulated virtual environment. The success of these technologies can be partially attributed to their recent appearance on markets. Since most users have still had little or no contact with them, experiencing them is novel and inevitably fascinating. The other relevant factor in their success is the immersive sensation they produce in the user. Fusing the real environment with a virtual one or replacing it completely, they create a unique and impressive sensation. […]

Our second article “Explorando el Cosmos with AR” came only a few months after the first one, and this one, made it all the way to the cover of “Astronomía” num. 245. This publication (featured on pages 38 to 44) focused on “Explorando el Cosmos”, the latest “Sal a Ver las Estrellas” tool. “Sal a Ver las Estrellas” is a project developed by SpaceRobotics.EU and committed to developing free tools to ease the promotion and dissemination of astronomy. Within “Sal a Ver las Estrellas”, “Explorando el Cosmos” is the newest and biggest project yet. It’s a state-of-the-art space-related exhibition designed to awaken interests in astronomy, solve some of the most common doubts about the universe, and complement other space education projects. Although straightforward almost-text-free posters may distinguish “Explorando el Cosmos” from everyday exhibitions, Augmented Reality is what really makes the difference. Through “NubaloAR” (which may be downloaded from GooglePlay and the AppStore for free) anyone can turn the exhibition into an AR experience just by scanning the posters with their phone’s camera. Besides presenting “Explorando el Cosmos”, in this article we further explored the advantages of using AR for educational purposes and proposed the usage of personal cell phones as audioguides and AR devices in modern museums and visitors centres.

[…] In a quite eloquent and memorable speech on January 9th 2007, Steve Jobs put forth the following idea about touch-screen phones: ” […] Who wants a stylus? You have to get them and put them away and you lose them, yaigh! Nobody wants a stylus! So let’s not use a stylus. We are going to use the best pointing device in the world, we are going to use a pointing device that we are all born with, we are born with ten of them, we are going to use our fingers. […] ” With these words, the world discovered the multi-touch screen system, a turning point for the portable device industry that for almost a decade kept stylus out of the market.

The essence of the key timeless philosophy that made him succeed lies in the simplicity of just taking advantage of what we already have and expanding its usefulness. So why not recover this idea? Why not apply this to the future of museums and exhibitions? Who wants an audio guide? You have to carry them, they are a hindrance throughout the visit and they allow you to interact neither with the exhibition nor with your companions. And who’s interested in coping with waiting times of half an hour or more to have the opportunity of accessing any of the interactive, 3D, or augmented reality elements?, which are always the most requested. Why not use as a guide and as an interactive 3D and augmented reality element a device that we always have on hand?, our mobile phone! This idea has been hanging in the air for several years now and “Explorando el Cosmos” is one of the proposals strongly committed to exploring all the possibilities it offers. […]

The future arrives at the Lunar Museum

It was then time for a change of topic, and for our 2020 article, we went with “The future arrives at the Lunar Museum”. As you may remember, back in 2020 we completed the renewal of the Lunar Museum in Fresnedillas de la Oliva. We were consultors in the design of the new exhibition, we built all the scaled models that were required and we contributed with an AR (Augmented Reality) app that visitors would use to tour the museum. It thus made sense to write about all this and let people know that the renewed museum was open to the public. Furthermore, in this article, we told the story that led to the museum being built there in the first place. It’s quite an interesting one that involves Spain contributing to the Apollo missions:

After World War II, the tension between the United States and the Soviet Union gradually materialized in what was known as the Cold War. This arose as a result of both powers intention to impose their respectives lifestyles worldwide. Through armed conflicts, advertising campaigns and technological confrontations, the US tried to expand capitalism while the USSR tried to do the same with communism.
The Korean War, the Vietnam War and contemporary political and military management in general have gone down in history as memories of dark days. Cautionary tales that remind us how close we came to nuclear fallout. On the other hand, the technological confrontation and especially the Space Race have transcended as the fascinating story of a great achievement for humanity, showing us how much and how fast science is capable of advancing if the adequate resources and motivation are provided. […]

As 2021 came closer, we changed our mindset from the Moon to Mars. Lots of missions were launched towards our neighbor planet that year and we had lots of scaled models to deliver and projects to develop. Our biggest hit that year was Mission: MARS, a VR experience based on the red planet. The experience begins in the year 2050, in a futuristic museum at Acidalia Planitia, north of Valles Marineris (Mars). From there, the user may explore the surface, travel to orbit, or explore rover replicas. The beta was a success and updates with new spaceships and scenarios came shortly after. Our “Astronomía” 2021 article was all about that.

[…].One of my dreams is to travel to space and visit other planets. As a space communicator, I’ve watched many videos, played many games, and seen so many images. But, until now, I had never been so excited as to make my hair stand on end, that’s what Virtual Reality achieves, especially these incredibly realistic experiences. […]

Last but not least, came our recent 2022 collaboration. For the one that has become our longest article yet, we choose to keep the Mars topic. Not to keep talking about the VR experience though, but to introduce our new itinerant exhibition. This giant set of scaled models, 1:1 replicas, touch screens, holograms, and so many other elements is entirely dedicated to Mars and the participation of Spain in its exploration missions. The opening at Expoastronomica was a success and it has already been booked for many other locations. I’ll just let you read about it:

[…] The same way it occured with clusters like the Pleiades and asterisms like Orion’s Belt, it is very likely that the caveman recognized wandering planets in the sky. And although the scarcity of records makes it difficult to determine when exactly Mars entered the list of known stars, certain artistic references allow us to affirm that Ancient Civilizations already knew the red planet.

The Babylonians, for example, interpreted the positions of the stars according to the belief that they predicted the great events of the future. These astrological omens are thought to date back to the s. XX BC, and their compilation in Enūma Anu Enlil, an ancient work of cuneiform writing on clay tablets, could be the first written reference to Mars, a planet that has been observed for centuries. […]