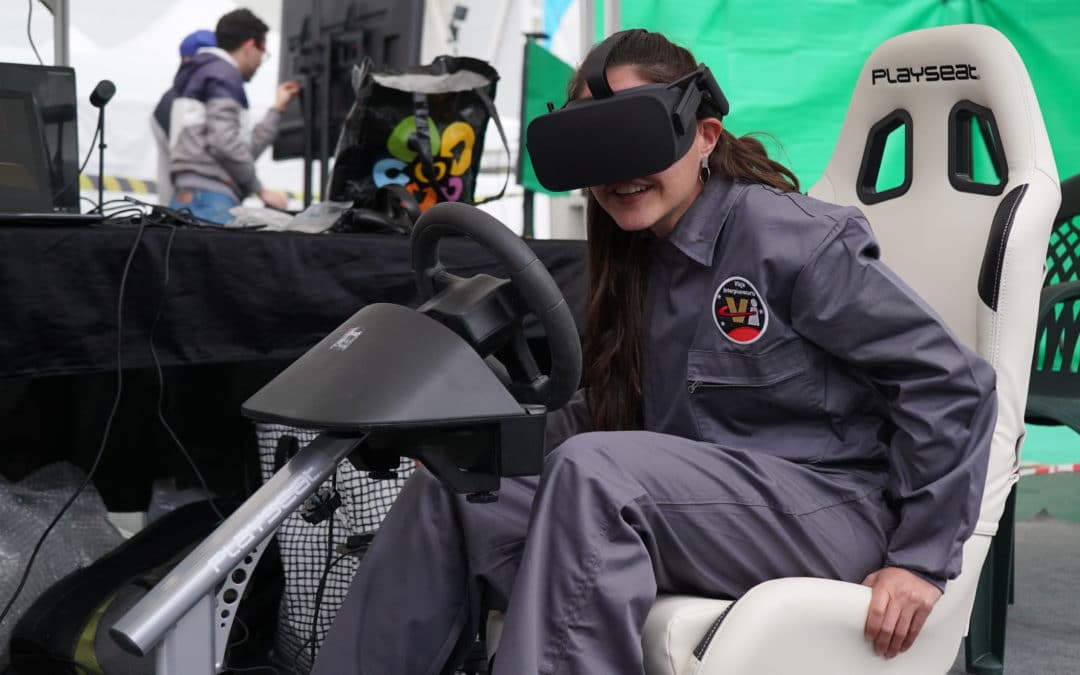 After a huge campaign that promised American superiority over the USSR in the fields of space exploration and missile defence, John F. Kennedy was elected president of the USA in November 1960. In that same year, the Apollo programme was founded within the NASA, although with an uncertain purpose yet. The goal of the Apollo endeavour became clearer during the following months and was definitely established during Kennedy’s worldwide famous speech “We choose to go to the Moon” in 1962, in which he clearly stated that this program would successfully land a man on the Moon and return him safely to the Earth by the end of the 1960’s decade. It took NASA nine years of out-of-the-box-thinking ideas and new-technology developments, and over fifteen billion dollars in salaries and contracts, but in July 1969 they finally landed a manned spacecraft on the Moon surface and successfully returned its crew to the Earth.

Apollo 11 was the first ever manned mission to land on the Moon, and it opened the door to longer and more complex Apollo missions that kept running from 1969 to 1972, but as its name may clue, it was not the first of its kind. Launching, landing and retrieving the Apollo 11 required technology that did not exist by the early 1960s and that many NASA employees did not even believe was actually possible to be created on time. During the Space Race, the Saturn I rocket was refined into the Saturn IB which was then subsequently turned into the worldwide known Saturn V, the biggest heavy-lift launch vehicle ever designed by NASA and the only rocket that was capable of boosting the Apollo missions towards the Moon. Apollo Command, Service and Lunar Modules were designed from scratch to fulfil the fussy requirements of the mission, and a radio-communication network powerful enough to reach the Moon and an ambitious TV retransmission system were to be created too. To test all these new devices and protocols, 10 Apollo missions were launched before the triumphant Apollo 11.

However the events that lead to it took place, the fact is that on 1969, the Apollo 11 touched the Moon, and while the entire world enjoyed the success, at NASA, they were already thinking about the next missions to be launched. Apollo 12 and Apollo 14 followed the success of their older brother, and in 1971, NASA was confident to introduce Apollo’s next giant leap, the LRV (Lunar Roving Vehicle).

The Lunar Roving Vehicle (LRV) was an electric vehicle designed to operate in the low-gravity vacuum of the Moon and to be capable of traversing the lunar surface, allowing the Apollo astronauts to extend the range of their surface extravehicular activities. […] The frame was 3.1 meters long with a wheelbase of 2.3 meters [… , it] was made of aluminum alloy 2219 tubing welded assemblies and consisted of a 3 part chassis which was hinged in the center so it could be folded up and hung in the Lunar Module quad 1 bay. It had two side-by-side foldable seats made of tubular aluminum with nylon webbing and aluminum floor panels. […] A large mesh dish antenna was mounted on a mast on the front center of the rover. […] The wheels consisted of a spun aluminum hub and an 81.8 cm diameter, 23 cm wide tire made of zinc coated woven 0.083 cm diameter steel strands attached to the rim and discs of formed aluminum. Titanium chevrons covered 50% of the contact area to provide traction. […] Each wheel had its own electric drive, a DC series wound 0.25 hp motor capable of 10,000 rpm, attached to the wheel via an 80:1 harmonic drive, and a mechanical brake unit. Manuevering capability was provided through the use of front and rear steering motors. […] A T-shaped hand controller situated between the two seats controlled the four drive motors, two steering motors and brakes. Moving the stick forward powered the LRV forward, left and right turned the vehicle left or right, pulling backwards activated the brakes. […] Navigation was based on continuously recording direction and distance through use of a directional gyro and odometer and inputting this data to a computer which would keep track of the overall direction and distance back to the LM. There was also a Sun-shadow device which could give a manual heading based on the direction of the Sun, using the fact that the Sun moved very slowly in the sky. […] Deployment of the LRV from the LM quad 1 by the astronauts was achieved with a system of pulleys and braked reels using ropes and cloth tapes. The rover was folded and stored in quad 1 with the underside of the chassis facing out. […] The original cost-plus-incentive-fee contract to Boeing (with Delco as a major sub-contractor) was for $19 million and called for delivery of the first LRV by 1 April 1971, but cost overruns led to a final cost of $38 million. […] The LRV was developed in only 17 months and yet performed all its functions on the Moon with no major anomalies. Harrison Schmitt […] said, “….the Lunar Rover proved to be the reliable, safe and flexible lunar exploration vehicle we expected it to be. Without it, the major scientific discoveries of Apollo […] would not have been possible; and our current understanding of lunar evolution would not have been possible.” *1 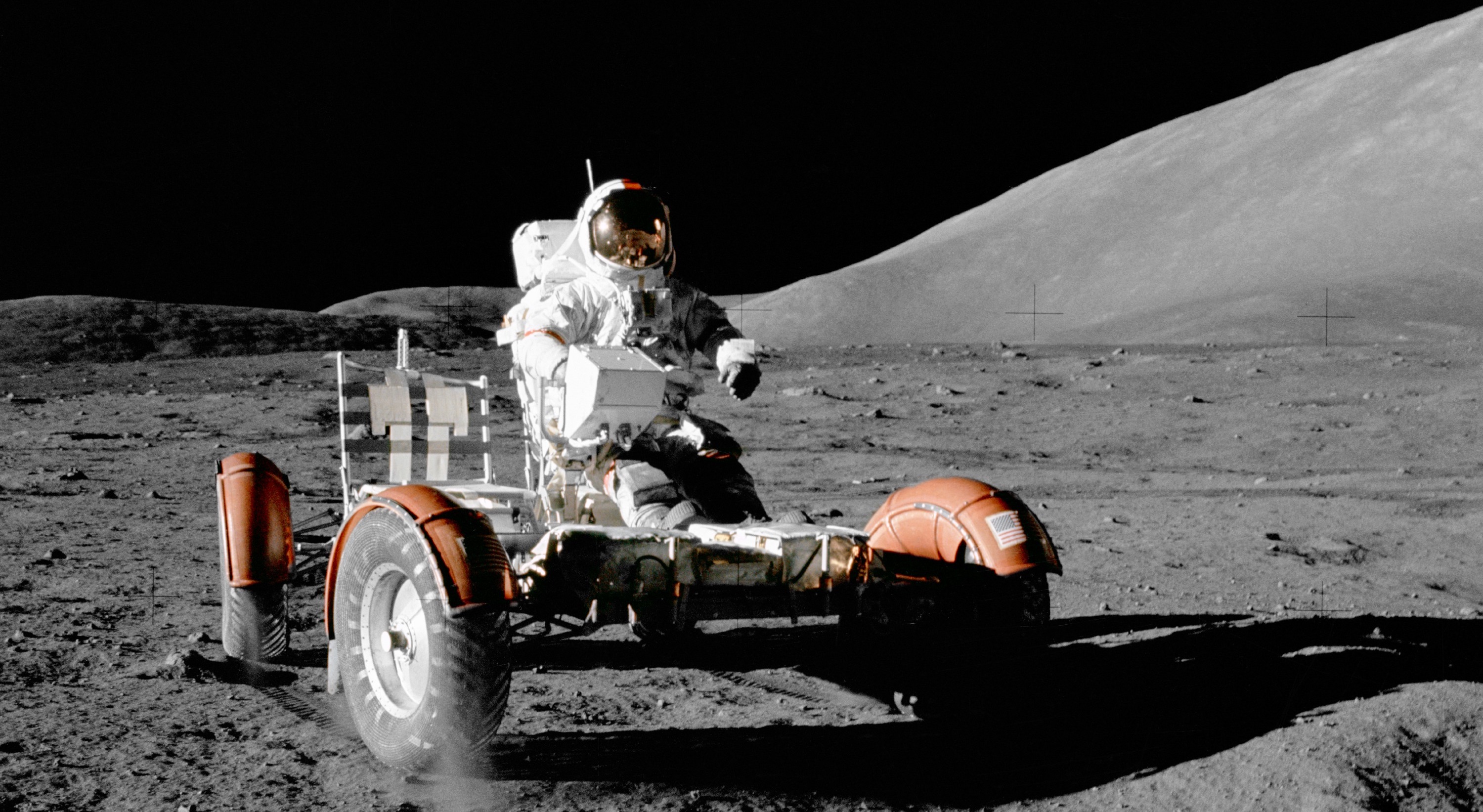 The LRV was first used in the Apollo 15, and the mission success led to the 1972 lunar-rover Apollo 16 and Apollo 17 missions.

Apollo 17 was the last lunar-rover mission, the last ever mission of the Apollo program and the last manned mission as of 2019 that has reached the Moon or actually anywhere beyond Earth’s orbit. It was launched on the SA-512 rocket from the Kennedy Space Center Launch Complex 39 at 12:33 a.m. Eastern Standard Time (EST) on December 7, 1972. As in all manned Apollo missions, the launching vehicle was a Saturn V, a 3,000-tons-weighted, 110-meters-high heavy-lift launch vehicle which propelled the Apollo 17 towards the Moon by burning over 13 tons of fuel per second. The Apollo 17 crew, made up of Commander Eugene Cernan, Command Module Pilot Ronald Evans, and Lunar Module Pilot Harrison Schmitt, reported having entered lunar orbit on December 10 and therefore began to prepare for the descent. Cernan and Schmitt landed at the Taurus-Littrow valley on the lunar surface on December 11 and carried out a 3-day mission during which 3 EVAs (Extra-Vehicular Activities) succeeded. On the first moonwalk, they successfully offloaded the rover and deployed the ALSEP (Apollo Lunar Surface Experiments Package) near the landing point. Soon after, they began their first geologic traverse driving the rover towards the Steno crate. During the upcoming days, they travelled to many other locations around the Lunar Module, setting an out-of-Earth unbeaten record by travelling 35.9 km in 4 hours 26 minutes total drive time. (The longest traverse was 20.1 km and the greatest range from the LM was 7.6 km.) On their Moon trips, they collected 114Kg of rock and soil samples and performed scientific experiments such as taking gravimeter measures. After three days of intense work, they received orders to head back home, and right before stepping into the Ascent Module for the last time, Gene said:

…I’m on the surface; and, as I take man’s last step from the surface, back home for some time to come – but we believe not too long into the future – I’d like to just [say] what I believe history will record. That America’s challenge of today has forged man’s destiny of tomorrow. And, as we leave the Moon at Taurus-Littrow, we leave as we came and, God willing, as we shall return, with peace and hope for all mankind. “Godspeed the crew of Apollo 17.” 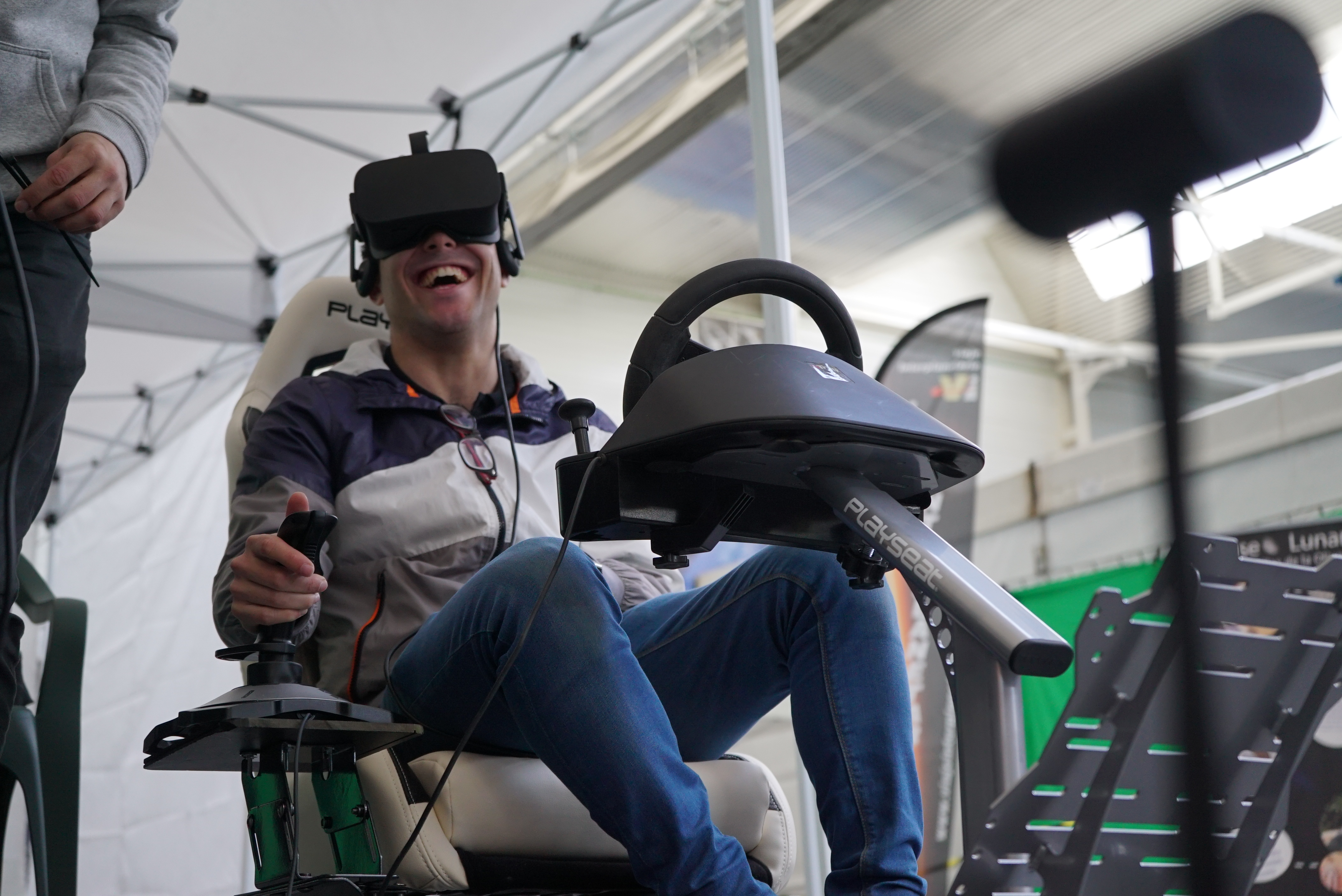 About the Apollo 17 VR Experience

When we began designing this experience back in 2018, we had two goals in mind: to show the world how did it feel like to drive a Moon rover, and to create an entertaining experience that would amuse every single user. To do so, we began placing the VR experience at the very same place where the Apollo 17 Descent Module landed on the Moon, creating a virtual version of the Taurus-Littrow valley. The terrain was generated faithful to the data provided by NASA, so that all the topographical features would accurately match what Cernan and Schmitt saw in their geologic transverses. Once the terrain looked good enough, we created the experience itself on the Unity game engine and placed the virtual terrain on the ground, and Earth and Sun images on a night-sky background, making sure their positions matched those of December 11, 1972. Once the environment was ready, our 3D team provided accurate models of the Lunar Module and of all the elements deployed by the crew, which included a USA flag, sample return containers, and the ALSEP (Apollo Lunar Surface Experiments Package). With all the elements in place, all that was left was a magic touch that would turn that 3D scenario into an amusing driving experience: We got the environment ready for an Oculus Rift VR hardware and included a responsive home-made digital lunar rover that could be controlled through a joystick.

After all the effort we put on it, we couldn’t have hoped for better reception. The beta test of this experience’s first version at ExpoAstronómica 2019 was an absolute success, and we are already looking forward to some further development that would eventually lead to an improved version 2.0. We already have many ideas for this improved version. Once we get back to it, the first thing to do will be recreating LRV’s control and display module, with fully working controls and heading and speed readouts and even with the Sun-shadow device at the top. If it proves to be reliable, we might be able to offer a 100% realistic lunar rover driving experience where users would have to make use of the real navigation system of the LRV.