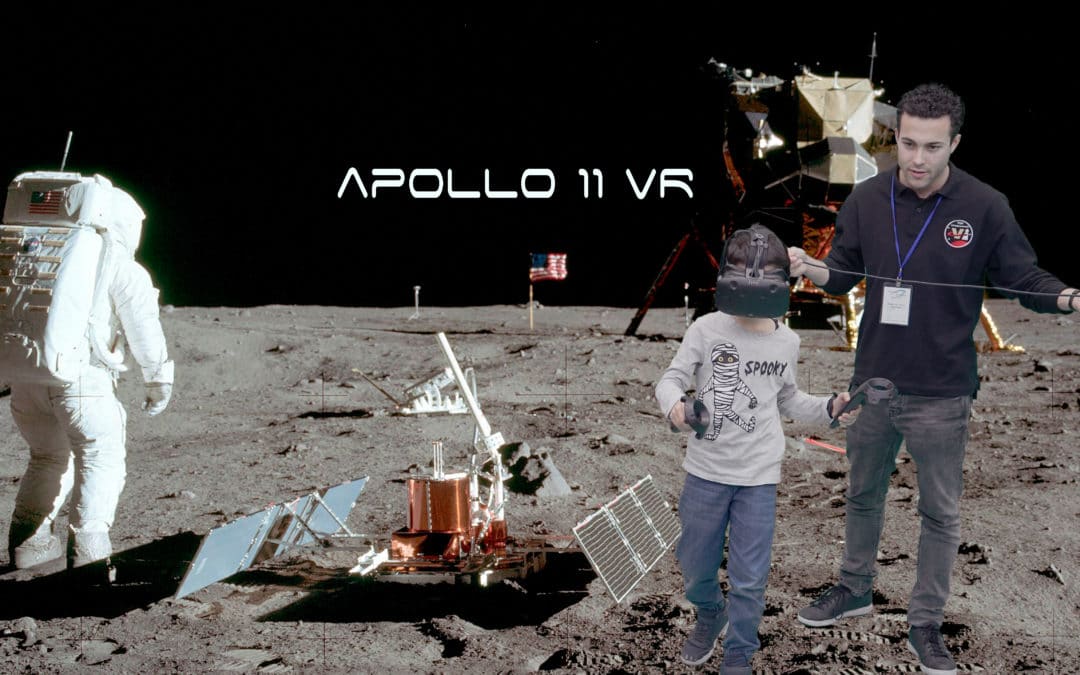 On the occasion of Apollo 11’s 50th anniversary, we recreate this mission as a Virtual Reality experience.

After a huge campaign that promised American superiority over the USSR in the fields of space exploration and missile defence, John F. Kennedy was elected president of the USA in November 1960. In that same year, the Apollo programme was founded within the NASA, although with an uncertain purpose yet. The goal of the Apollo endeavour became clearer during the following months and was definitely established during Kennedy’s worldwide famous speech “We choose to go to the Moon” in 1962, in which he clearly stated that this program would successfully land a man on the Moon and return him safely to the Earth by the end of the 1960’s decade. It took NASA nine years of out-of-the-box-thinking ideas and new-technology developments, and over fifteen billion dollars in salaries and contracts, but in July 1969 they finally landed a manned spacecraft on the Moon surface and successfully returned its crew to the Earth.

Apollo 11 was the first ever manned mission to land on the Moon, but as its name may clue, it was not the first of its kind. Launching, landing and retrieving the Apollo 11 required technology that did not exist by the early 1960s and that many NASA employees did not even believe was actually possible to be created on time. During the Space Race, the Saturn I rocket was refined into the Saturn IB which was then subsequently turned into the worldwide known Saturn V, the biggest heavy-lift launch vehicle ever designed by NASA and the only rocket that was capable of boosting the Apollo missions towards the Moon. Apollo Command, Service and Lunar Modules were designed from scratch to fulfil the fussy requirements of the mission, and a radio-communication network powerful enough to reach the Moon and an ambitious TV retransmission system were to be created too. To test all these new devices and protocols, 10 Apollo missions were launched before the triumphant Apollo 11.

However the events that lead to it took place, the fact is that on July 16 1969, the Command Module “Columbia” and the Lunar Module “Eagle” were launched on board of the 3,000-tons-weighted, 110-meters-high SA-506 Saturn V rocket, which propelled the Apollo 11 towards the Moon by burning over 13 tons of fuel per second. The Apollo 11 crew, which consisted of Michael Collins, Buzz Aldrin and Neil Armstrong, reported having entered lunar orbit on July 19 and therefore began to prepare for the descent. Buzz and Neil successfully landed at the Tranquility Base (located in the Moon’s Mare Tranquillitatis) on July 20 1969, and egressed the Lunar Module a few hours later, proclaiming the so-many-times quoted phrase “That’s one small step for [a] man, one giant leap for mankind“. During the single extra-vehicular activity that they performed before heading back home, the two most famous astronauts in history retrieved lunar soil samples, raised a USA flag, deployed various scientific experiments including seismographs and a retroreflector, took tons of pictures and unveiled a plaque that quoted “Here men from the planet Earth first set foot upon the Moon, July 1969 A.D. We came in peace for all mankind.“. With no difficulties whatsoever, they managed to get back to the Eagle’s Ascent Module, take off, rendezvous with Michael back in lunar orbit, and safely return to Earth, where they landed on July 24.

About the Apollo 11 VR Experience

When we began designing this experience back in 2018, we had two goals in mind: to commemorate the Apollo 11 50th anniversary by showing the world what the astronauts actually saw at the Moon and what they did down there, and to create an entertaining experience that would amuse every single user. To do so, we began placing the VR experience at the very same place where the Eagle landed on the Moon, creating a virtual version of the Mare Tranquillitatis. The terrain was generated faithful to the data provided by NASA so that all the topographical features would accurately match the field of view that Neil and Buzz had from their landing point. Once the terrain looked good enough, we created the experience itself on the Unity game engine and placed the virtual terrain on the ground, and Earth and Sun images on a night-sky background, making sure their positions matched those of July 21, 1969. Once the environment was ready, our 3D team provided accurate models of the Lunar Module and all the elements deployed by the crew, those being the SWCE (Solar Wind Composition Experiment), the PSEP (Passive Seismic Experiment Package), the DTREM (Dust, Thermal, & Radiation Engineering Measurements Package), the LRRR (Laser Ranging RetroReflector), the LFA (Lunar Flag Assembly) and the ALSRC (Apollo Lunar Sample Return Containers). With all the elements in place, all that was left was a magic touch that would turn that 3D scenario into an amusing experience, namely, getting the environment ready for an HTC Vive VR hardware.

After all the effort we put on it, we couldn’t have hoped for better reception. The beta test of this experience’s first version at ExpoAstronómica 2019 was an absolute success, and we are already looking forward to some further development that would eventually lead to an improved version 2.0. We already have many ideas for this improved version, the first one of which is to include interactivity with the environment and the man-made objects, so that users may collect soil samples, deploy the instruments themselves and, ultimately, experience a full faithful recreation of Apollo 11’s extra-vehicular activity.