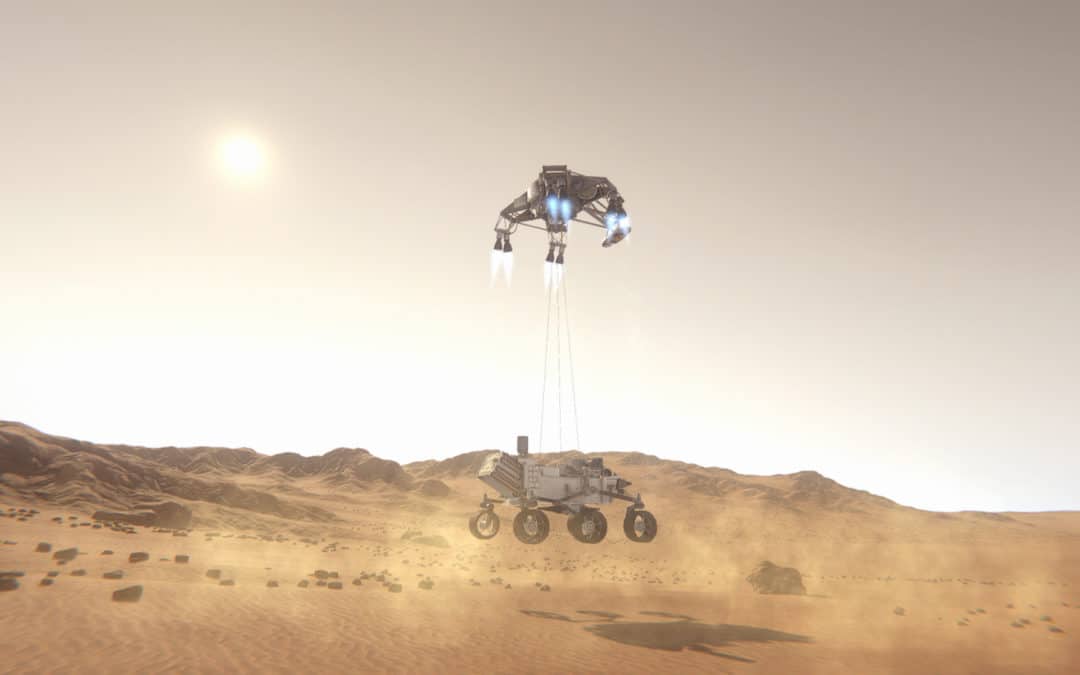 At SpaceRobotics.EU we love space, we love new technologies, and we love to share our knowledge and our passion for space sciences. That’s why we’ve created “Mission: Mars”, a VR environment that simulates Mars’ surface and features the latest missions sent by humanity to our neighbour planet.

Our team has already completed the final public beta, which today becomes available all around the globe. In this first version, the user may explore huge scenarios of Martian-like terrain as well as Tianwen-1, Rosalind Franklin, and Perseverance, the three rovers that China, Europe, and the USA are sending to Mars in 2020 and 2022. The experience begins in the year 2050, in a futuristic museum at Acidalia Planitia, north of Valles Marineris (Mars). In the main hall of the museum, a huge replica of Mars dominates the scene. Trough it, one can transfer to an orbit around Mars and see the planet from above as well as its moons and some satellites that are exploring it. Together with the Mars one, replicas of Tianwen-1, Rosalind Franklin, and Perseverance are featured at the museum. The user may explore them in situ and learn about them, but it’s more fun to exit the museum and travel to the past to witness the full deployment sequence of each rover. The 3D models of the rovers are fully articulated and have been created faithful to the real ones. Once they are deployed, one may stay around to see how they move and explore the red planet’s surface. It’s cool, for example, to check out how Rosalind drills the surface or how Perseverance tests its tiny helicopter. Also, each instrument onboard the rovers has its own audioguide for the user to listen more about them. You are free to be curious, explore the rovers on your own and learn about what catches your attention. And once you are done, Mars is still surrounding you, waiting to be explored. Enjoy the views and relax or wander and look for dust devils and dust storms. It’s up to you!

What’s coming up next?

If everything works as planned, for the next months we would like to include all the missions that have ever landed on Mars. This means adding the Pathfinder, Spirit, Opportunity and Curiosity rovers as well as the two Viking landers. We are also working on including more present and past artificial satellites that orbit or have orbited around Mars. New features such as tasks and achievements will also be included to expand the playability of the experience and encourage users to keep finding more about Mars. Moreover, we are already working on a futuristic scenario that would picture a huge Martian landscape in 2050. The user would be able to exit the 2050 museum to explore the first Martian base and interact with it.

For the 2021 subsequent update, hopefully, Perseverance and Tianwen-1 will be already operating in the Martian surface. This means we will be able to recreate a realistic simulation of the actual landscapes that these rovers explore. Users could see in real-time what the rovers are doing, where are they doing it and what they achieve. That would truly be the ultimate experience!