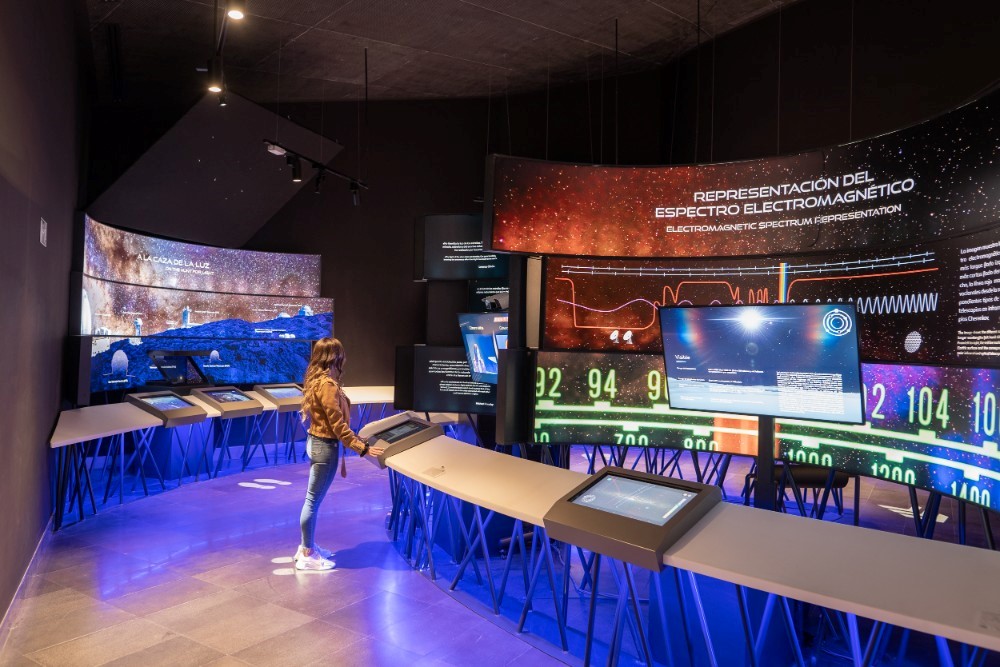 The Visitor Center of the Roque de los Muchachos Observatory (ORM) was inaugurated in December 2021 with great expectations and promised to be a modern and technological space where visitors could learn about astronomy and cosmology, and discover the telescopes and the history of ORM in an entertaining and friendly way. As part of the SpaceRobotics.EU team that developed the scientific-technological content of the center, we decided to visit the place in September 2022 to check that our work had been applied correctly.

Upon arriving at the center, we found an impressive and modern place, full of light and with careful decoration. After passing through the entrance lobby, we headed towards the first module, dedicated to the history of ORM and the construction of the telescopes. There we found a series of informative panels and several technological devices, such as tablets and augmented reality viewers, which allowed us to learn more about the history of the observatory and see how telescopes are built from the inside.

The next module was dedicated to the physics of light and the interactions between light and matter. There were several interactive stations where visitors could experiment with the electromagnetic spectrum and learn how different types of light affect matter. There was also an HD projection that showed how light propagates in space and how it can be used to study celestial objects.

The third module was dedicated to stellar evolution and cosmology and contained several holograms that showed the formation and life cycle of stars, as well as the structure and origin of the universe. There was also a virtual reality station where visitors could immerse themselves in a simulation of the universe and see how galaxies and stars form.

Overall, we were very satisfied with what we saw at the ORM Visitor Center. The content that we had created had been effectively applied and had been integrated into a series of interesting and fun technological devices that made learning more enjoyable. In addition, the center had a tranquil and serene atmosphere that invited visitors to enjoy the space and learn about science and technology in a relaxed way.

Our visit to the ORM visitor center and observatory was a very interesting experience. We were very happy to see how the content we had created had been effectively applied and how the center had been transformed into an attractive place to learn about science and technology. In addition, we were able to enjoy a splendid day in a beautiful place and learn more about astronomical observation and the ORM. We will return to this amazing place in the future and continue to explore and enjoy science and technology.

The Cabildo de La Palma has shown its satisfaction after the Roque de Los Muchachos Visitor Center received no fewer than 31,058 visitors (December 2021 to December 2022). “A figure that demonstrates the importance of this infrastructure for tourists visiting the Beautiful Island”.

The Roque de Los Muchachos Visitor Center is a work carried out through an investment of around 6 million euros from the FDCAN and has all areas of the building covered with basalt, including the roofs, the turns of floor beams, and false ceilings in order to create a very integrated effect in the volcanic environment where it is located. In addition, inside the facility, there is a first welcome room in which a general presentation of the IAC, the observatory, and the telescopes that operate there is included.

The building also has, it says, three exhibition halls: the first of them, called ‘Canarias’, a window to the universe, where the unique conditions offered by the archipelago, and especially La Palma and the Roque de los Muchachos for astronomical observation, is explained; the second, called ‘Exploring the universe’, in which the current state of knowledge we have about the Universe is shown in a synthetic way; and the third called ‘Back to Earth’, in which the natural framework in which the Observatory is located is shown.