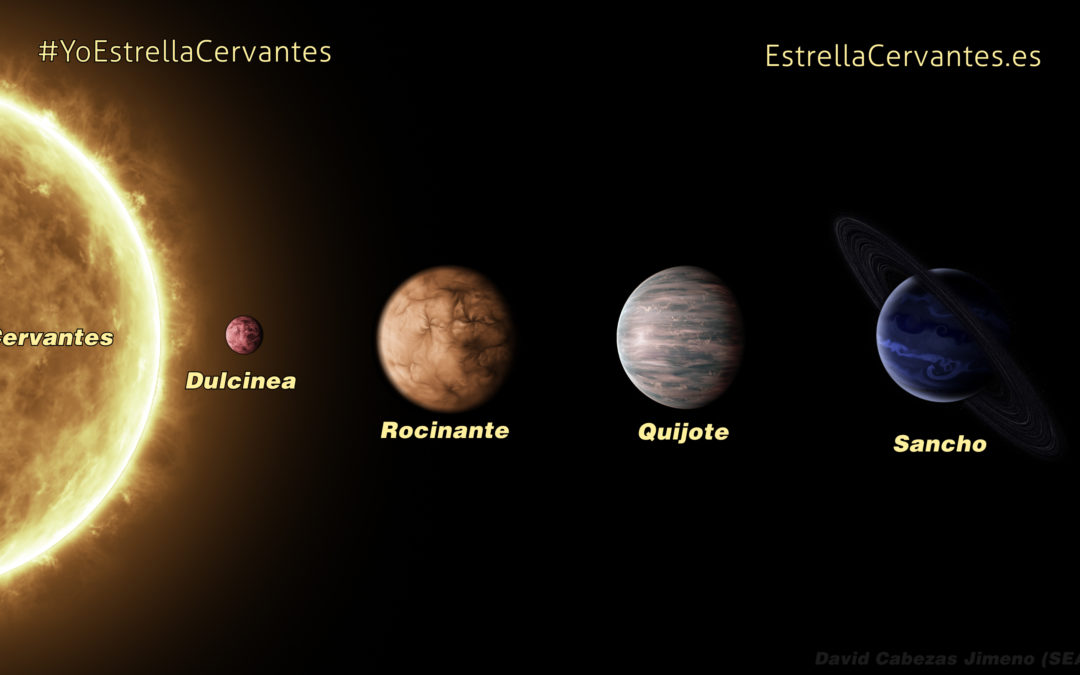 We produce a video and all the official multimedia material to support the naming of the μ Arae star as Cervantes and its exoplanets as Quijote, Sancho, Dulcinea and Rocinante.

Exoplanets are always named automatically after their stars. When four planets were discovered orbiting around the star μ Arae, they were hence named, μ Arae b, μ Arae c, μ Arae d and μ Arae e. However, earlier this year, the IAU (International Astronomical Union) organised the first NameExoWorlds Competition, to give proper names to 19 “ExoWorlds”, one of which is the μ Arae solar system. The “Planetario de Pamplona” (Spain) has proposed Cervantes as the star name and Quijote, Sancho, Dulcinea and Rocinante for the exoplanets. Miguel de Cervantes Saavedra (1547-1616) was a famous Spanish writer and author of “El Ingenioso Hidalgo Don Quijote de la Mancha”, which leading character is el Quijote and also features his squire Sancho, his horse Rocinante, and his beloved Dulcinea.

About the Multimedia Material

When the SEA (Spanish Astronomical Society) found out about the NameExoWorlds Competition, they commissioned a video and other multimedia material to support the Cervantes, Quijote, Sancho, Dulcinea and Rocinante proposals. We produced the 60sec-long video that shows the position of Cervantes (μ Arae) in the Ara constellation and the renaming of its exoplanets. From the final production we extracted some images that became the official illustrations of this solar system and that may be used as posters or for any other educational purpose.

Update: Our proposal was actually the winning one and therefore we finally have an astronomical object named after this renown Spanish writer!