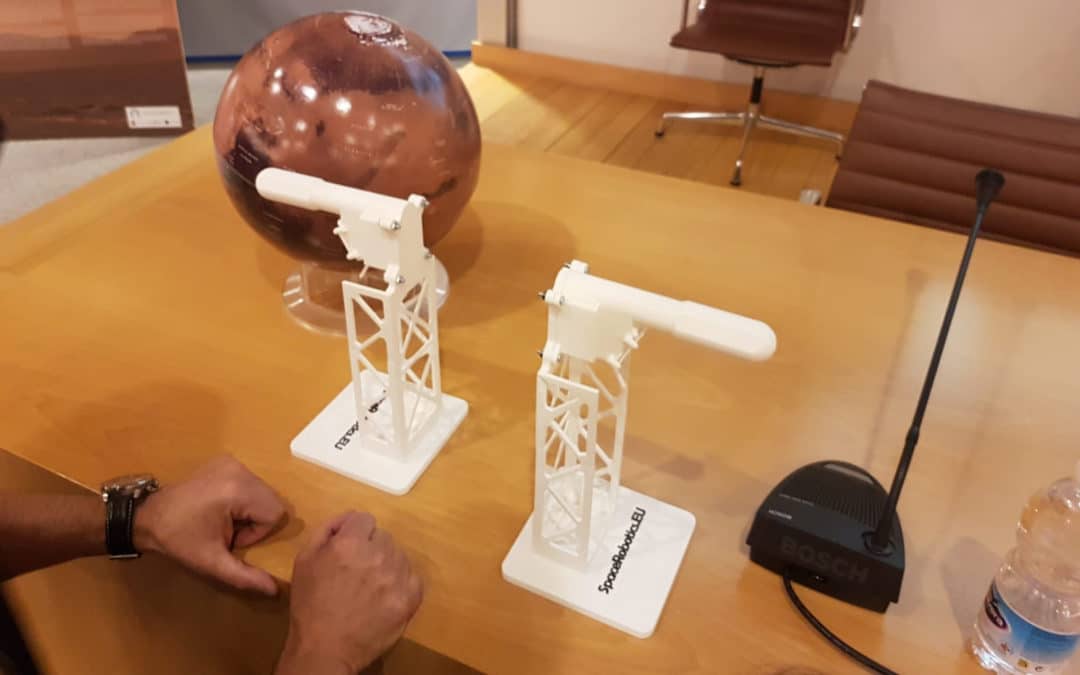 Space Robotics was invited to the Insight presentation at the CAB and requested to provide TWINS scaled models.

The very same day NASA’s latest Mars Lander “InSight” successfully reached its deployment location, we were invited to a presentation of this mission at the CAB. A few weeks earlier, CAB had requested a few scaled models of TWINS, InSight’s onboard weather station which they had developed at Madrid; and we provided them on time, right before attending the presentation.

InSight (Interior Exploration using Seismic Investigations, Geodesy and Heat Transport) is a Mars lander built by NASA and launched on an Atlas V-401 rocket from the Vandenberg Air Force Base on May 5, 2018. After a six-month interplanetary journey,

InSight touched down on Mars at 11:52:59 a.m. PT (2:52:59 p.m. ET) on Nov. 26, 2018. The lander plunged through the thin Martian atmosphere, heatshield first, and used a parachute to slow down. It fired its retro rockets to slowly descend to the surface of Mars, and land on the smooth plains of Elysium Planitia. *1

InSight is well known for being the martian weatherman, as it daily provides weather information from the red planet; however, its science objectives aim a bit higher. InSight physicists have two major goals that they intend to achieve by analyzing the data that InSight’s instruments retrieve. First of all, they are trying to understand how was Mars formed on the early days of the Solar System and how did it evolve to become the red planet that is familiar to us. And secondly, they aim to determine how dead the planet is in terms of tectonic activity and meteorite impacts. With those goals in mind, they are calculating:

and many more variables. To achieve these calculations, researchers rely on InSights cutting edge scientific instruments which include SEIS (Seismic Experiment for Interior Structure), a super-sensitive seismometer; HP3 (Heat Flow and Physical Properties Probe), which measures the heat flow at a five-meter depth; and RISE (Rotation and Interior Structure Experiment), a Doppler-Shift radio experiment that will track how much Mars’ North Pole wobbles. 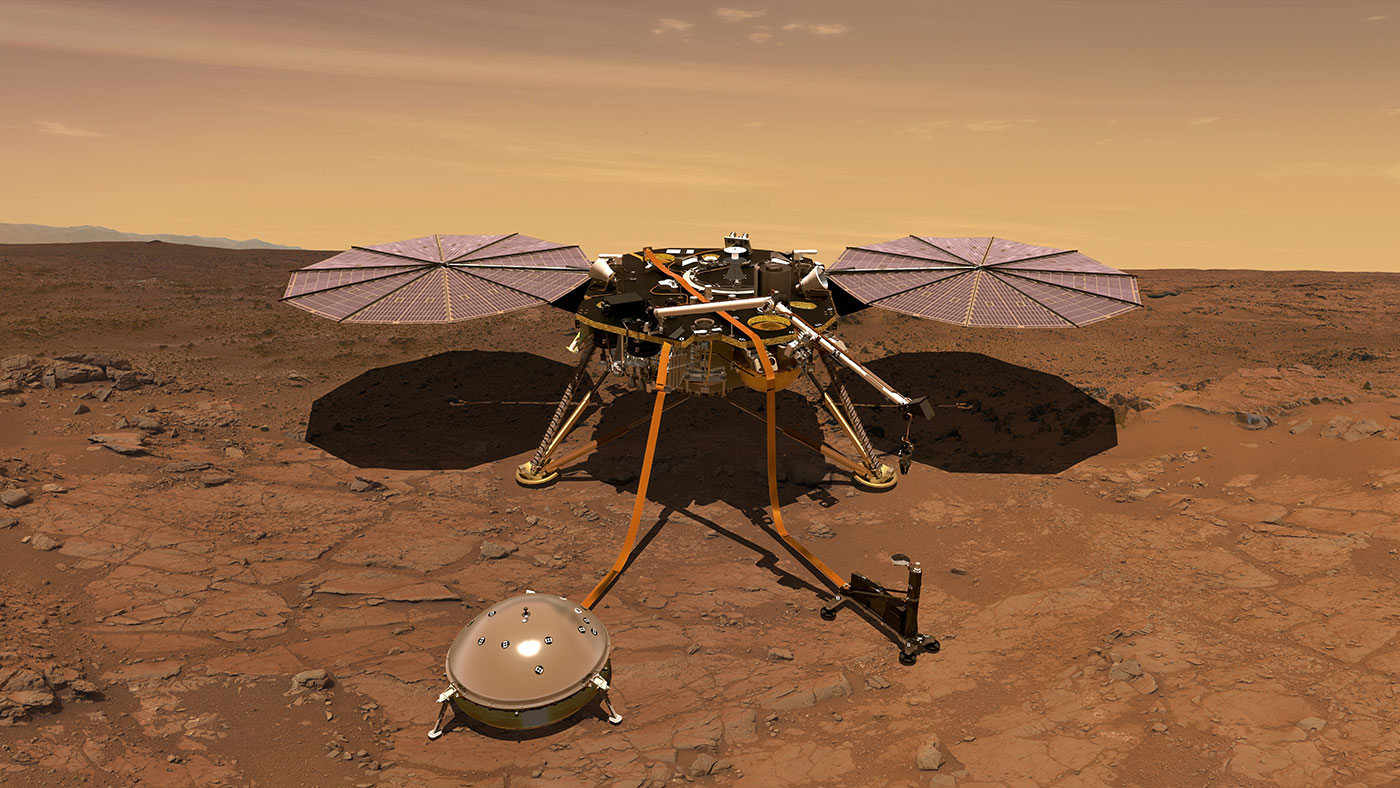 TWINS in an auxiliary but yet crucial instrument onboard InSight. It’s a weather station consistent on several wind and temperature sensors, inspired in Curiosity’s also-CAB-built REMS instrument. Besides providing weather information that will be valuable on its own to contribute to our understanding of the red planet, TWINS is crucial for the other InSight instruments to work, as its measures will determine when are the other instruments to be deployed and will be used to calibrate all their measures from that moment to the mission end. 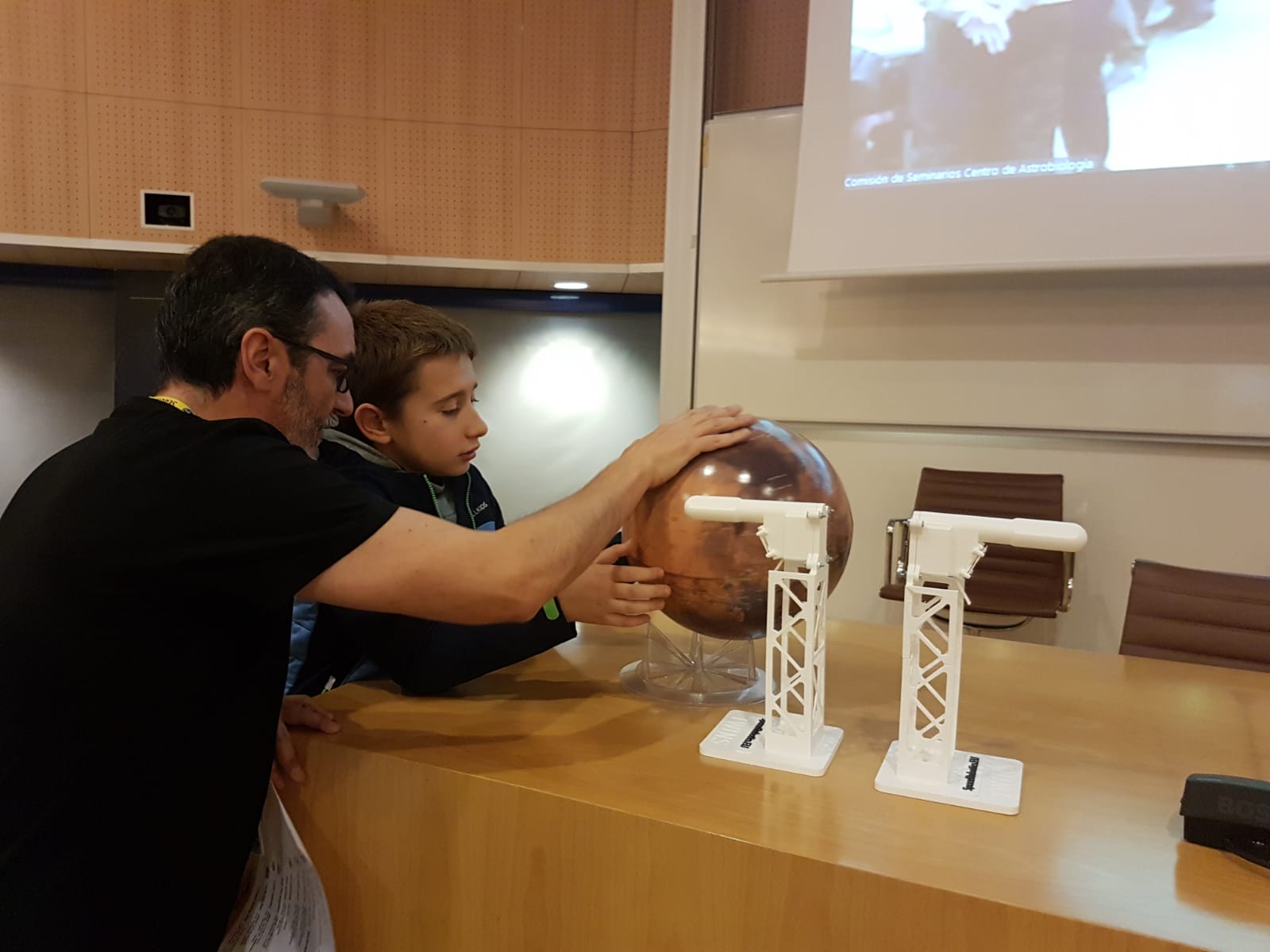 Our 3D team followed their habitual procedure while building TWINS’ scaled model: The instrument was computer-modelled from scratch to include the finest details and ensure 3D-printing compatibility. Once the design had been revised by our experts to check it faithfully represented the original instrument, we put our 3D-printers array to work and produced all the requested units. If you require a model yourself for didactic purposes or for any other reason, feel free to contact us and we will provide. 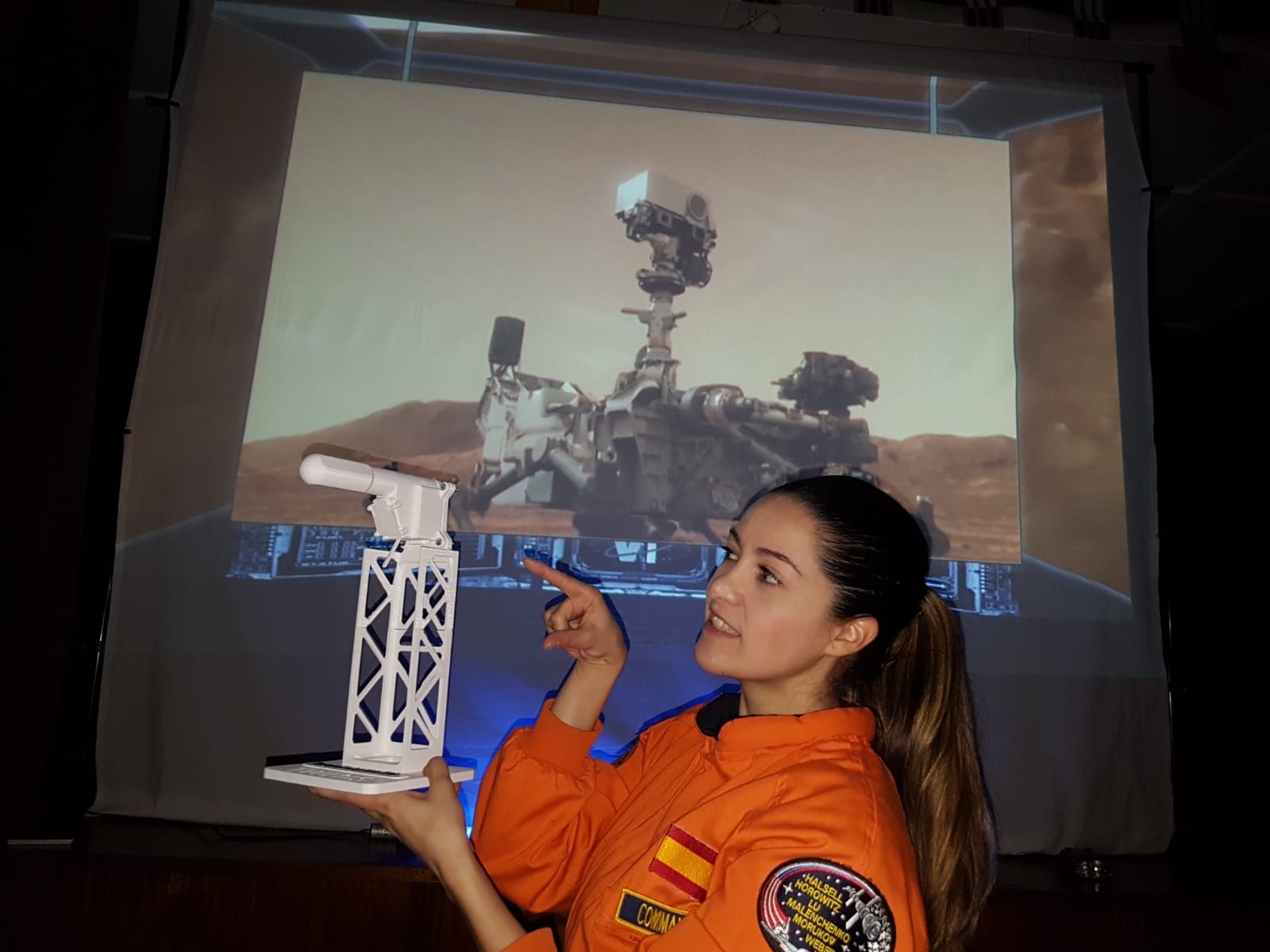 The CAB (Astrobiology Centre) is a joint institute between the CSIC (Superior Scientific Investigations Council) and the INTA (National Institute of Aerospace Technology). It was established in 1999 with the support of CAM (Community of Madrid) as an affiliate of the NAI (NASA Astrobiology Institute). Since then, CAB’s main activities have always been scientific investigations relative to a new field of study, astrobiology. During its almost 20-year life, CAB researchers have participated in hundreds of projects to unveil the mystery of life, discover the origin of organic molecules in space, understand the extremophiles’ biochemistry, and, of course, to look for extraterrestrial life. Some of their most remarkable successes include the NanoCosmos project, to make further progress in the investigation on the origin of Earth’s rich chemical variety; multiple investigations at Rio Tinto, to study some extremophiles which could be alien-like; and their study on PAHs formation in outer space. It’s also worthy of mention their training methods for future planetary manned missions, as well as their participation in huge space-exploration missions such as ESA’s Bepi-Colombo and PLATO. Finally, the CAB is world-wide known for designing and building Mars-exploration instruments such as NASA’s Curiosity‘s REM, InSight’s TWINS and Mars2020‘s MEDA.

The CAB has a Scientific Culture Unit (UCC) that collaborates with the UCC+i network from FECYT. The UCC is meant to disseminate the latest astrobiology discoveries and to approach science to the general public. With this purpose in mind, they publish their own science journal, maintain up-to-date various social-media accounts, and organize all kinds of visits, events, workshops and lectures. For some of these workshops and events, they requested our 3D-printed scaled models of the TWINS weather station, which are now hopefully being used with didactic purposes. 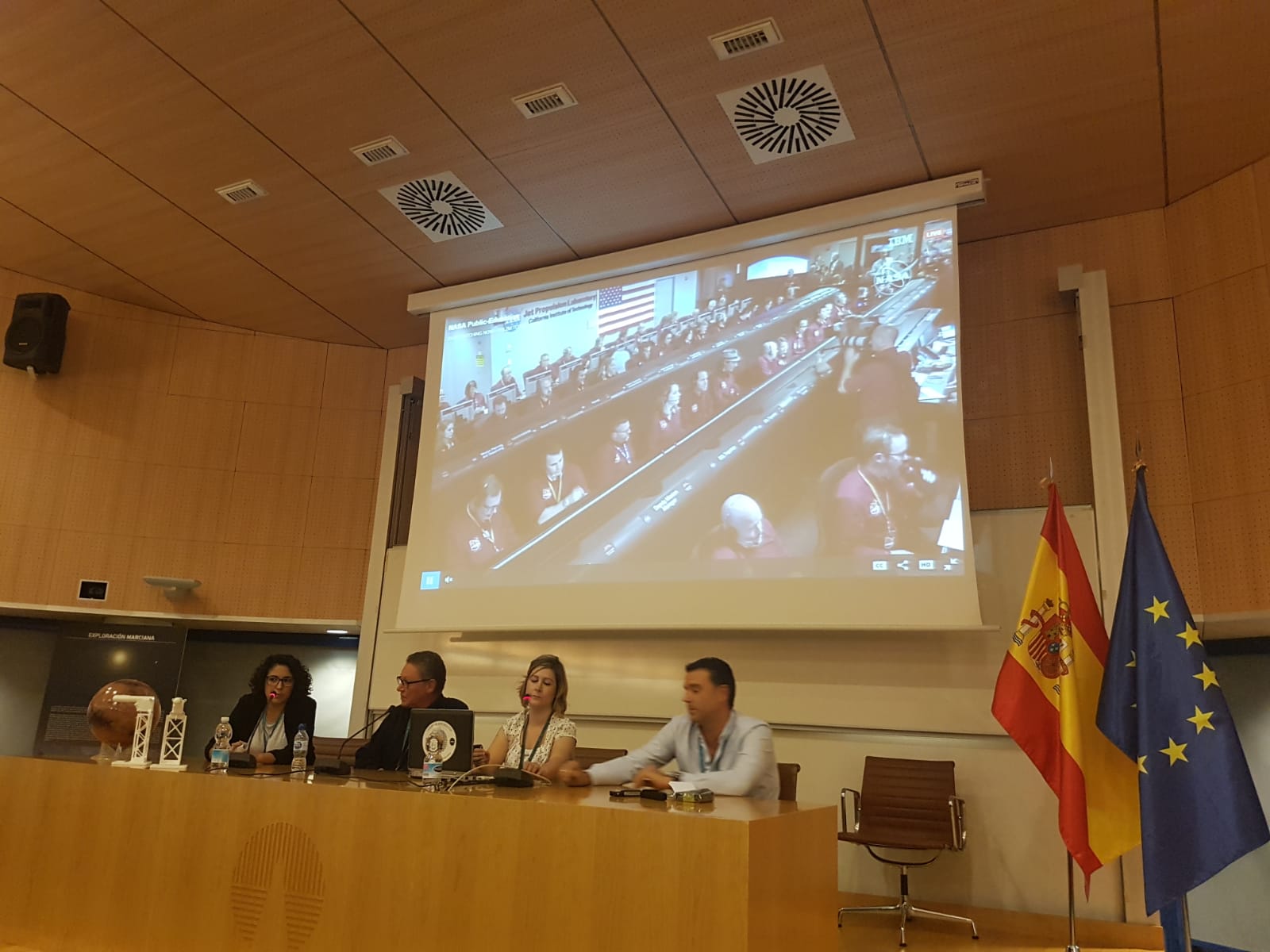