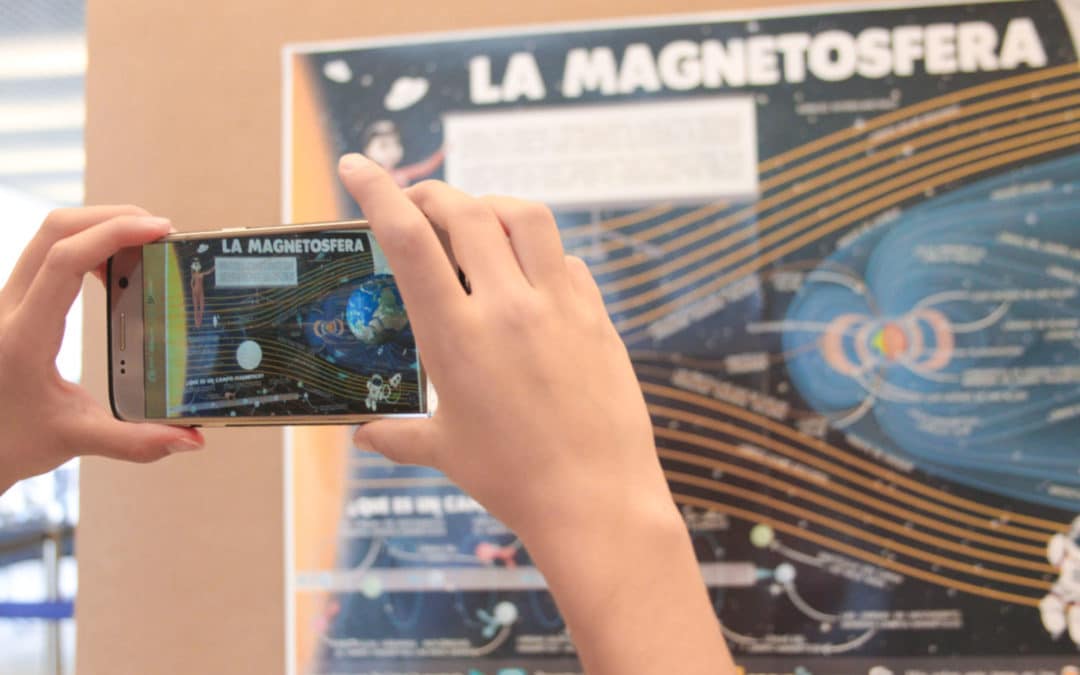 “Explorando el Cosmos” is the latest “Sal a Ver las Estrellas” tool. Entirely designed by a SpaceRobotics.EU multidisciplinary team, this resource comprises a state-of-the-art space-related exhibition and an AR App through which you may interact with the entire exhibition by just pointing your phone’s camera to each poster.

On “Sal a Ver las Estrellas”

“Sal a Ver las Estrellas” is a project developed by SpaceRobotics.EU (a Nubalo Studios S.L. division), co-financed by the Spanish Astronomy Society (SEA) and the Spanish Foundation for Science and Technology (FECYT) and committed to developing free tools to ease the promotion and dissemination of astronomy. Within “Sal a Ver las Estrellas”, “Explorando el Cosmos” is the newest and biggest project yet.

“Explorando el Cosmos” is a state-of-the-art space-related exhibition designed to awaken interests in astronomy, solve some of the most common doubts about the universe, and complement other space education projects. On release date, twelve posters will be supplied. Each one of them either addresses a specific question or presents a topic related to space; for example, some of them clarify concerns such as why is Pluto no longer a planet or how the Sun moves, while others expose themes that vary from the colour of the stars to the nature of black holes. In each poster, the information is presented concisely and clearly through graphic schemes and expressive visually-appealing images specifically designed to convey at a glance the essence of each topic.

Although straightforward almost-text-free posters may distinguish “Explorando el Cosmos” from every-day exhibitions, augmented reality is what really makes the difference. Trough “NubaloAR” (which may be downloaded from GooglePlay and the AppStore for free) anyone can turn the exhibition into an augmented reality experience just by scanning the posters with their phone’s camera. Whenever the camera is pointed to any of them, a virtual animation related to the poster appears. These animations may complement an explanation or enliven the images. Additionally, the corresponding audioguide is played automatically.

With “NubaloAR” on their phones, visitors have no need for a conventional audioguide. And as they are holding in their very own hands the augmented reality device itself, they’ll have to wait in no queues to access these contents. “NubaloAR” and similar apps will definitely rule in museums during the next decade, and this is not only due to their convenience and accessibility. Actually, we have successfully proved that using “NubaloAR” significantly increases the amount of knowledge retained by visitors. This happens due to two known effects of this technology, first of all, it encourages visitors to explore the exhibition entirely, and secondly (and in fact more important), it facilitates the assimilation of knowledge.

The application makes visitors explore the exhibition entirely because it turns the visit into a game. When you get to the first poster, take out your phone, and discover all the hidden content, you will be living the learning process in a new and completely different way and you will immediately have an itch for further hidden content. After checking a few of them you will just don’t want to leave without knowing what is hidden behind every single image. The success of this system may be partially attributed to the novelty. People are used to old-fashion exhibitions and will be inevitably attracted to an innovative design. This is the incentive to extend the visit. But the success of novelty is ephemeral unless it’s built on a solid basis, in this case, interactivity. The application transforms a traditional visit in which one just listens and looks around, into an interactive activity in which we must participate if we want to make the best of it and discover all it has to offer. As popular culture says, “the more, the more, and the less, the less.” If our participation is not needed and we don’t undertake any activity, our desire to do anything will shrink, our body tends to rest, and we end up leaving. But if we are encouraged to participate and this action returns an immediate positive response, in this case, knowledge, animations and so on, this attitude will be reinforced: the more we do, the more we will want to do, and this is how the promotion of interest is achieved.

Quantity is important, and of course, the higher the percentage of the exhibition visitors see, the better. If we want the public to learn more about space, undoubtedly, the first step is to transmit knowledge. But there is no use to all the knowledge of the world, as good as it may be, if visitors fail to retain it. It is here where another pleasant effect of this technology enters the scene, the facilitation of knowledge assimilation. It has been proven that not all learning methods are equally efficient. It is true that everyone learns in their own way, but still, certain methods have proven to be, in general, significantly better than others. For example, if we receive information audiovisually, we will retain it more easily than if we simply see it, read it or listen to it separately. In the same way, we better learn through active methods that involve us in the learning process than by just receiving information passively. Taking this into account, “Explorando el Cosmos” is a double winner: first of all, for presenting the contents audiovisually instead of offering an audio guide and visual content independently, and secondly, because to access these contents an explicit intervention is necessary, which provides that active-learning experience that has proven to be way more efficient than conventional methods.

Sometimes, it happens to be that the fun stuff is also the good one; in this case, seeing how the black hole of a poster comes to life and begins to suck it all around it, or witnessing the sidereal collision between two exoplanets, besides being fun, it’s facilitating us the assimilation of new knowledge about space sciences.

How to get “Explorando el Cosmos”

With the augmented reality app, visitors explore astronomy with amusement and get involved with science in a completely new way that will undoubtedly arouse the interest in space science in more than one visitor. However, in order to have a real impact and inspire hundreds of kids, not only great material is necessary, but it must also reach the general public. Precisely with the purpose of making it accessible to the widest possible public in mind, “Explorando el Cosmos” was designed as a DIY (do it yourself) exhibition, so you need to move to no museum to enjoy it, and you will have to go through no procedures to get it, you just have to assemble it. Of course, only a large centre will have the resources to print the images on several-meters-wide panels; but anyone may get them online for free and print them on common paper sheets to hang them on the walls of a small school or even at home. The app works with all-sized images and the content of the exhibition will always be the same. Just download them from salaverlasestrellas.com.

In addition to turning “Explorando el Cosmos” into a DIY exhibition, this all-online distribution method in which both the software (the app) and the materials (the posters) are supplied via Internet has another advantage: a quick-upgrade capacity: If at any point some user detects an error, the product may be corrected almost instantaneously by means of an update; if the scientific community reports a new discovery regarding the content of any of the posters, we can include it in the AR app to increase its visibility; and if we want to add a new poster to the collection, again a simple update does the trick. In fact, this fall, on the launch date, twelve initial posters will be available at salaverlasestrellas.com, but we will be including one new poster each month the project remains active. This makes “Explorando el Cosmos” a dynamic always-updated exhibition, which at any time may be adapted to the latest news and the demands of the public.

The posters and the app are undoubtedly the main course, but they are not the only downloadable resources at salaverlasestrellas.com. “Explorando el Cosmos” includes other tools such as, 3D-printable figures that match all the topics in the exhibition, or Astronaut LiLi’s podcast, each one of which expands the content of one of the posters.

Astronaut LiLi is a public figure that acts out as a science communicator in schools and space-related institutions. Since the very first performances, she earned the affection of her young audience, and in the last few years, she has gained great importance, gathering hundreds of attendees at her events and thousands of followers on social media, where she posts as @astronautalili. This character has become known throughout the country, working with renowned institutions such as ESA, INTA, or MUNCYT; and her ability to get the public interested in astronomy is beyond any doubt. After participating in Astronaut LiLi’s Show or being engaged in similar activities, many parents and teachers show interest in similar resources to keep up science dissemination at school or at home in a rigorous but still enjoyable way. Astronaut LiLi’s podcast included in “Explorando el Cosmos” is a response to this demand. Each one of the audios that comprise this series (which are available for free at Ivoox.com) expands the content of one of the posters in the exhibition. In this way, parents or teachers who wish to do so may easily expand the knowledge provided by the exhibition by just looking for the corresponding podcast and hitting “play”.