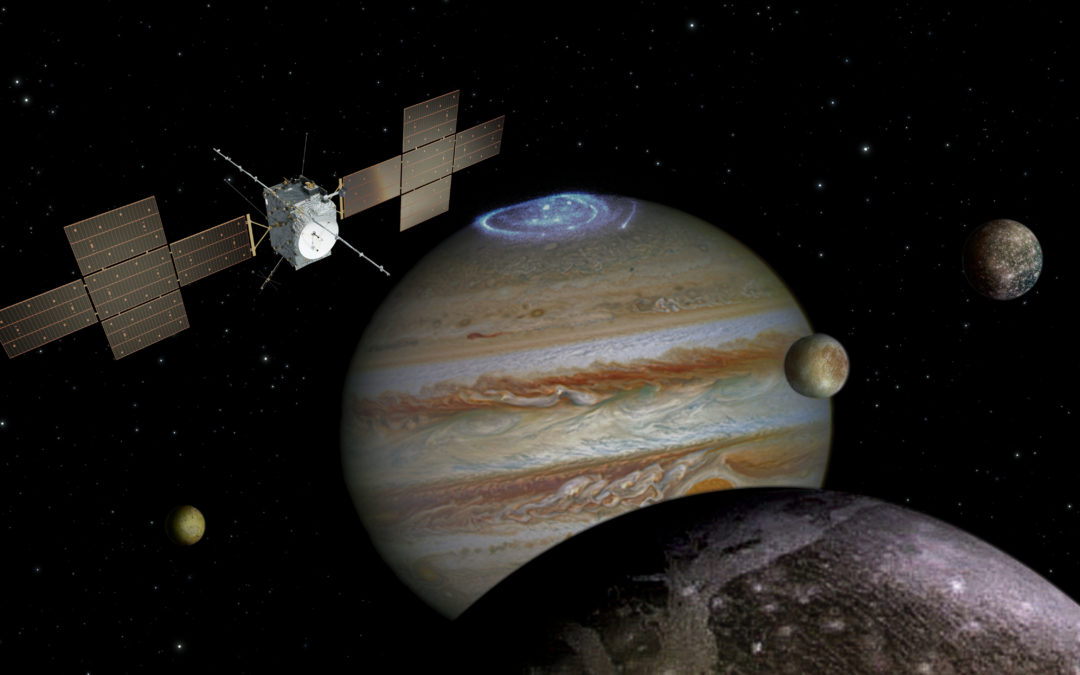 JUICE won’t be launched until June 2022 but the final design has already been presented. On request of the JUICE Project team, we have created the first ever scale model of JUICE’s final design.

JUICE (JUpiter ICy moons Explorer) is the first large-class mission in ESA‘s  (current) Cosmic Vision 2015-2025 programme. The launching is planned for June 2022 aboard an Ariane 5 rocket that will take-off from the Kourou Spaceport in the French Guiana. Its subsequent seven-year interplanetary journey includes three Earth, one Venus, and one Mars flybys before it finally reaches Jupiter in October 2029. But actually, Jupiter is not its final destination. JUICE will indeed orbit Jupiter, but it will then make two Europa and several Calisto flybys before it finally enters Ganymede’s orbit, where it will remain until the end of its nominal mission on September 2033.

JUICE is way far from being a one-objective kind of mission, while in the Jovian System it will study Jupiter’s complex atmosphere composition, dynamics and structure to achieve a better understanding on how energy, momentum, and materials are transported between layers. JUICE will also study the Jupiter’s and its moon’s magnetospheres, where many physical events occur viz. electro-dynamical coupling, giant aurora, radio emissions, micro-magnetosphere, ion creation, intense radiations, induced B-field or large-scale electromagnetic disruptions. Many other features like gravitational coupling and long-term tidal evolution of the Galilean Satellites will be studied by this mission. Moreover, the new discoveries that may arouse from this studies will not only help us understand Jupiter and its moons as new light should also be shed on the many Jupiter-like exoplanetary systems.

However, JUICE’s actual main challenge is to characterize the conditions that may have led to the emergence of habitable environments among the Jovian icy satellites. Most inquiries to address this challenge will be carried out once in Ganymede. Among others, these are some of the questions JUICE will try to answer while orbiting the moon: Which is the inner structure of the moon? Are there really any liquid water reservoirs under Ganymede’s surface? Which is the layer structure of the subsurface oceans? How are geological features distributed through the moon? Which is the surface’s exact composition? How are topography features distributed around the surface? Which is the internal mass distribution? How does the moon’s interior evolve? How are Ganymede’s exosphere and magnetosphere? Which are the physical properties of the icy crust?

To solve all these questions and address all the previous objectives, JUICE relies on the following huge payload: JANUS (Jovis Amorum ac Natorum Undique Scrutator), an optical camera to study global, regional and local morphology and processes on the moons, and to perform mapping of the clouds on Jupiter. MAJIS (Moons And Jupiter Imaging Spectrometer), a hyper-spectral imaging spectrometer for observing tropospheric cloud features and minor species on Jupiter and for the characterization of ices and minerals on the surfaces of icy moons. UVS (UV imaging Spectrograph), a UV spectrometer to characterize the composition and dynamics of the exospheres of the icy moons, to study the Jovian aurorae, and to investigate the composition and structure of the upper atmosphere. SWI (Sub-millimeter Wave Instrument), a sub-millimeter wave instrument to investigate the temperature, structure, composition, and dynamics of Jupiter’s stratosphere and troposphere, and the exospheres and surfaces of the icy moons. GALA (GAnymede Laser Altimeter), a laser altimeter for studying the tidal deformation of Ganymede and the morphology and topography of the surfaces of the icy moons. RIME (Radar for Icy Moons Exploration), an ice-penetrating radar to study the subsurface structure of the icy moons. J-MAG (MAGnetometer for JUICE),  a magnetometer to characterize the Jovian magnetic field, its interaction with the internal magnetic field of Ganymede, and to study subsurface oceans of the icy moons. RPWI (Radio & Plasma Wave Investigation), a radio plasma wave instrument to characterize the radio emission and plasma environment of Jupiter and its icy moons. 3GM (Gravity & Geophysics of Jupiter and Galilean Moons), a radio science package that will be used to study the gravity field at Ganymede and the extent of internal oceans on the icy moons, and to investigate the structure of the neutral atmospheres and ionospheres of Jupiter and its moons. PRIDE (Planetary Radio Interferometer & Doppler Experiment) will use the standard telecommunication system of the JUICE spacecraft and VLBI (Very Long Baseline Interferometry) to perform precise measurements of the spacecraft position and velocity to investigate the gravity fields of Jupiter and the icy moons.

Powering the full payload while orbiting 778 million km away from the Sun requires a huge solar array. Two wings of five panels each will cover a total surface area of nearly 100 m², capable of providing 820 W at Jupiter by the end of the mission. The panels will be completely folded during launch and only deployed once in space. The 3D model that we created on request of the JUICE Project team includes these articulated and rotative solar panels arrays as well as fine details of each instrument in the payload. As always, the scaled model it’s specifically designed to be 3D-printed so the commercially available figures look as good as the original but on a manageable size.